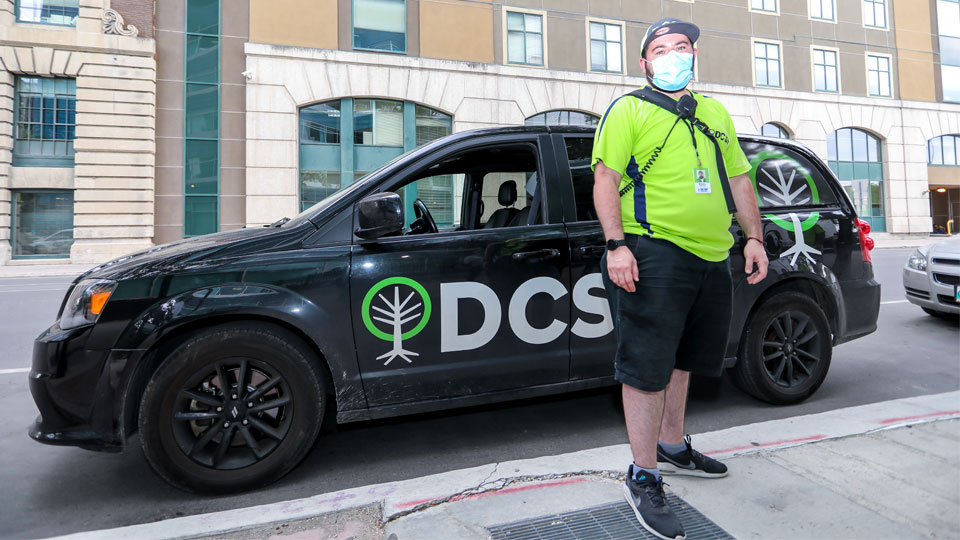 One of the Downtown Community Safety Partnership’s (DCSP) main goals is to meet people where they’re at. That’s meant in the figurative sense – conveying that the DCSP is there for everyone, regardless of whether they work, play, or live downtown. But that’s also meant in a very literal sense, as one of the most important functions of the DCSP is their safety transport program that picks up those in need and drops them off to safer spaces and to access the resources they need.

Those safety transports are done by MAC247 (Mobile Assist and Connect) team members with the DCSP’s vans. Their role is not to serve as an emergency vehicle but used as a means to conduct safe transport. This support is at the heart of the daily duties of Gabby Glowatsky, Supervisor of the MAC247 team that provides presence and outreach services.

“Our participants all need a safe place to go, but they also need a safe way to get there,” said Glowatsky. “Transports are an integral part of our service – a service we deliver 24/7.”

The DCSP expanded to 24/7 service in May 2021, the same time they started offering transports, and it’s clearly a needed service that is making a difference. Glowatsky estimates that each van does around 10 to 15 transports during the day shift, and the night shift might typically do between 15 to 20 transports. Add all of that up, and the DCSP has done more than 1,500 transports since they started the service.

Each of those transports might look slightly different too. In some instances, the DCSP gets calls from a nurse or social worker at a hospital asking for a transport for their client to get to a shelter, or vice versa where a shelter might call asking for the DCSP to pick up someone from their space to get non-emergency medical assistance at a hospital. Other calls come from the Winnipeg Fire & Paramedic Services when they medically clear somebody. Some transports are planned in advance if a DCSP client needs to attend an appointment, while others are impromptu if MAC247 team members run into someone who isn’t feeling safe and doesn’t feel comfortable riding a bus to get to a safer place.

That’s all part of a continuum of care that is crucial for the DCSP’s strategy and was the reason for starting the transport program in the first place.

“A lot of the time, we’ll turn over a person to that safe place or to other caring hands that can offer that initial support,” noted DCSP Executive Director Greg Burnett of the transports. “Some of the folks we help are participants – they’re the people we help on a regular basis. So, we may get reconnected or take them to the next place or do a follow-up with them and make sure that those supports are continuing, rather than just ending. Our teams are experts in determining what the best resource for that person at that point in time might be. We work with the person and try to get them to the place that best meets their needs.”

“We’re meeting folks where they’re at in their lives,” added Glowatsky. “We have all these resources that people can access – whether that’s a shelter, showering, laundry, food – but it’s not helpful for us to tell them about all these places they can go if they don’t feel safe or if they don’t have the means to get there. It really strengthens the bond between us and those relatives.”

The DCSP is doing much more than just moving people from one place to another with their transports – they’re moving their relationships with community members forward and creating trust with those who are at-risk so they can make a significant difference in their lives.

“People often say, ‘you see us’,” said Burnett. “These people have come to realize that they’re not invisible and we want to work with them.”

Opening those relationships opens the door to much more. What starts as simply transporting someone without a home to an appointment, for example, hopefully leads to further connection with the DCSP, finding a housing situation for that person, and lining up employment – all resulting in that person being self-sufficient and in a better and safer place.

It’s that mission and those types of relationships that keep the wheels turning for the transport program.