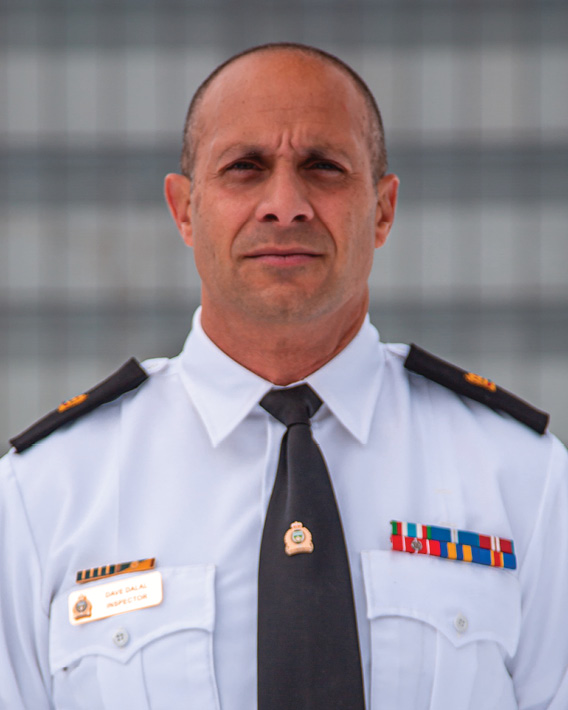 Superintendent Dave Dalal has been a police officer since 1995 and currently oversees all Uniform Operations. Prior to promotion to the Executive, he most recently was in command of Central Division which includes the downtown. Prior to this, he was assigned as a Duty Officer, overseeing all police operations on behalf of the Executive on a rotational basis and the Commander of Division 42 – Investigative Services. Concurrent to his police career, Dave spent 25 years in the Canadian Armed Forces – Army Reserves where he attained the rank of Lieutenant Colonel. In his last assignment before retiring in 2015, he was the Commanding Officer of the Brigade Artillery Group which consisted of two Regiments and one Battery spread across three provinces. Dave has a wide range of experiences in policing, starting in general patrol, as all members do, and progressing to plainclothes investigations. His military experience in operational planning lead him to a number of planning roles for major crowd events such as royal visits, large concerts, Grey Cups, and annual Canada Day celebrations.

Dave was appointed as a Special Events Commander for the WPS in 2015, which includes the operational planning and oversight of all major events. He was a Volunteer Lead for the 2017 Canada Summer Games for Spectator and Event Services. Dave currently serves on the Board of Directors for the Main Street Project.

Dave is a graduate of the Incident Command System 100/200/300 program. He has completed the City of Winnipeg Emergency Management Course, the National Public Order Commander’s Course, and the International Executive Development Program. Dave has a Bachelor of Science (Hons) and has also completed a Master in Police Leadership and Management.