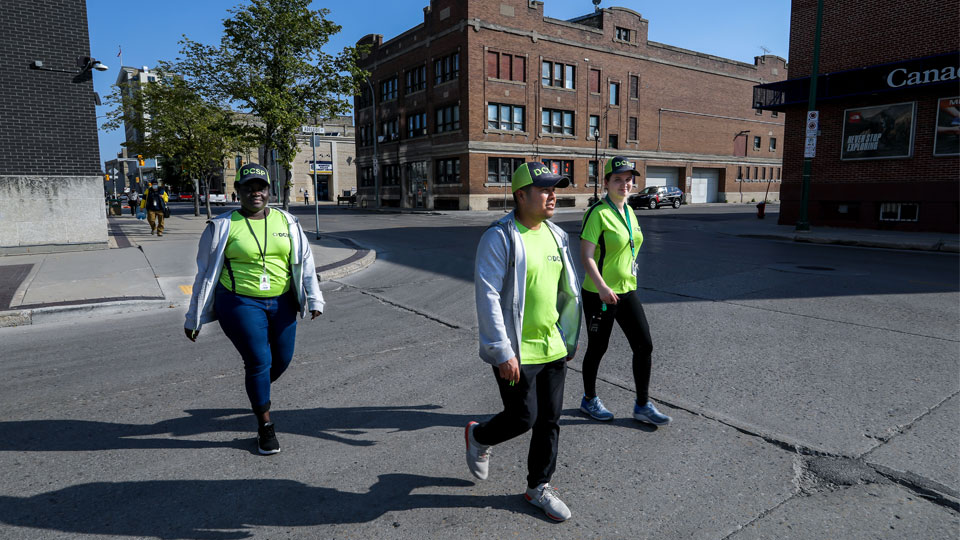 They say that nothing worth doing ever came easy, and that’s true for the Downtown Community Safety Partnership (DCSP) as they strive to create a healthier, safer, and more connected downtown community. Those goals are certainly worthwhile, meaning they aren’t the type of changes that happen overnight – they have to be achieved one step at a time.

The DCSP approaches their work at an individual level in the same way. When encountering people in downtown Winnipeg who might need assistance in getting back on their feet, they know there is no quick solution to the challenges they face. But by helping them along step by step, the DCSP is able to see remarkable changes in people’s lives.

One step that they have helped numerous downtown community members take is finding suitable housing. But many steps often need to be taken before getting to that point.

That typically starts with the CONNECT and MAC 24/7 teams, which are both frontline teams on the downtown streets, assessing the needs of those in the community. Once that connection is made and the DCSP learns what type of assistance an individual needs, they’re connected with the COAR (Community Outreach Advocacy Resource) team – an outreach and casework team that works with at-risk individuals to provide follow-up care.

“They’re the ones who will actually take a participant and start working with them, whether they need ID or a social insurance number or a birth certificate, or if they need help navigating the government systems or need housing,” said Greg Burnett, Executive Director of the DCSP. “Then they’ll start working with any number of connections and relationships we have with property owners who would be a right fit for that individual.”

And that individual focus is the key when it comes to housing solutions. There’s no one-size-fits-all approach to helping a community member find a place to live. Each person has their own needs, and that’s exactly how the DCSP approaches their work. That individual approach has been key to the DCSP’s ability to house more than 100 people over the past two years.

It’s not just a matter of finding housing for someone and leaving it at that, though.

“Housing is a big thing, but when you’re used to being under a bridge or on the street, having four walls and a door doesn’t really solve other challenges that might be present,” said Stephanie Johnson, COAR Supervisor for the DCSP. “Once someone is housed, it’s important to get them connected to food resources, detox or mental health supports, or whatever they may need.”

The DCSP has maintained an over 90 percent success rate in keeping people housed, thanks in no small part to that commitment to sticking with those community members. But it’s also due to the relationships the DCSP has built with other community partners.

“That personal relationship with landlords and property managers is really beneficial because it helps the people we work with avoid evictions,” noted Johnson. “If someone isn’t working out in a specific home, that landlord will contact us first so that we can either solve the problem or find them somewhere new to go instead of just evicting them and putting that on their record.”

Aside from the safety it provides, and the opportunity to have a space to call one’s own, housing can be an important step in working toward bettering one’s life in many other aspects as well.

“When you have a home, maybe you have an alarm clock beside your bed so you can know what day of the week it is and what time it is. That helps with making it to appointments,” noted Johnson. “A house also helps us in knowing where to find the people we work with. If an appointment gets scheduled for a client of ours and we’re running around the streets and to different shelters to find them, maybe we don’t find them in time to let them know about an appointment. When they have a home, you can knock on the door or leave a note.”

Those are seemingly small steps, but like the steps the DCSP is taking to create a healthier downtown, they aren’t insignificant.

“When somebody has a house and makes it into a home, that’s the first step in the right direction,” said Burnett. “That sense of purpose, ownership, and pride creates a lot of positivity.”